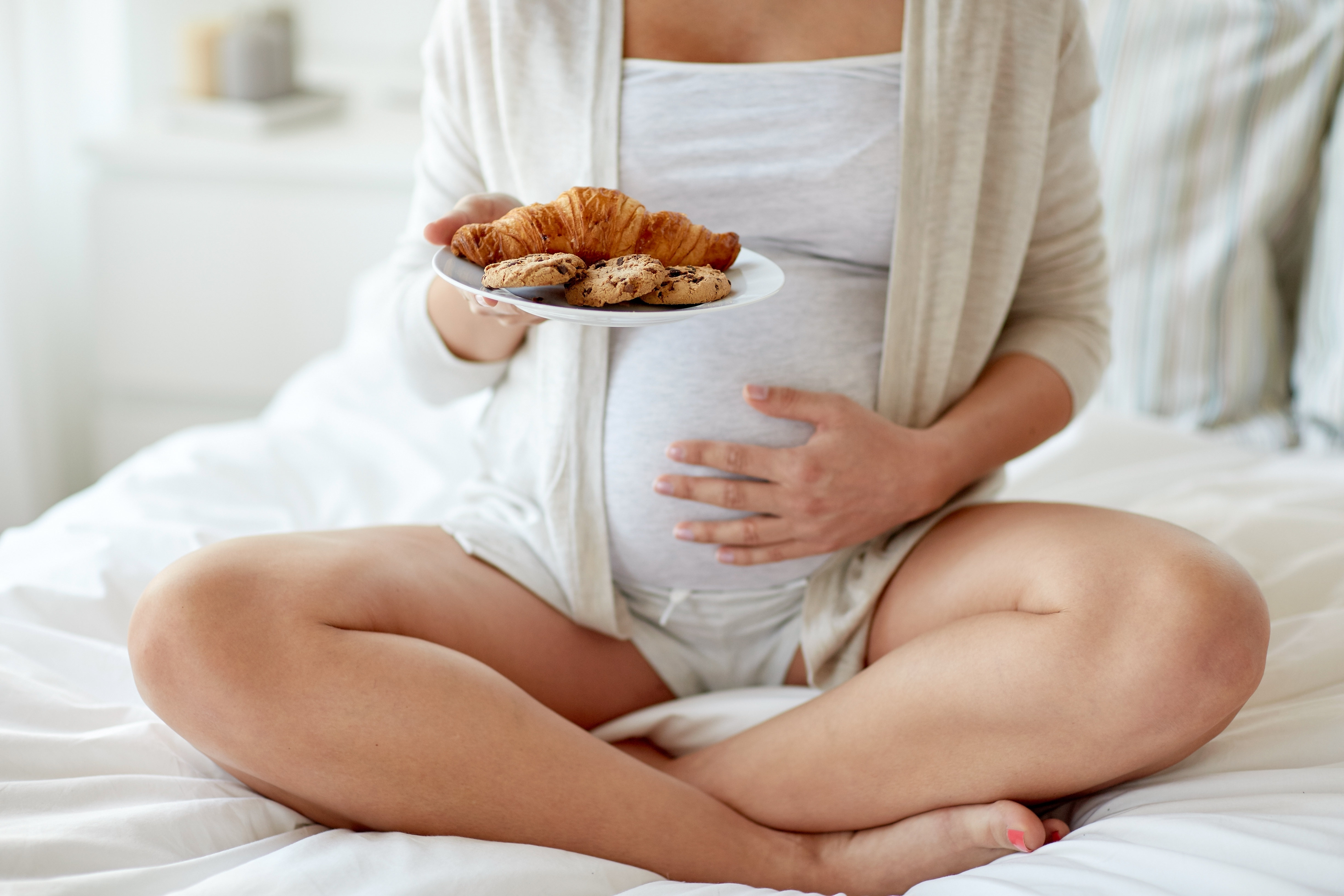 Should I change what I eat when pregnant?

Pregnancy is such a magical time, but I know from personal experience that it can be exhausting and daunting and while you want to do your upmost to protect your precious bump, the information overload can be overwhelming. I have therefore put together a list of eight points to highlight and explain the current UK dietary advice during pregnancy:

We know the phrase ‘eating for two’ all too well, but it is now well established that you don’t need to increase the amount you eat when you are expecting a baby other than just in the last trimester (by an extra 200kcal per day). The human body is incredibly well adapted to cope with the demands of growing a baby. The rapid rate of growth of a fetus means high demands for nutrients such as protein, calcium and iron, so to meet these demands the mother becomes better at utilising the nutrients that are available in the food, rather than requiring a lot more in the diet. That said, daily UK recommendations for pregnant mothers are slightly higher than the general population for some nutrients, see point 3 below.

Before getting pregnant and during pregnancy you should try to get a balanced diet including high fibre carbohydrates; lean sources of protein including oily fish; low fat sources of dairy; sources of unsaturated fats; a wide range of fruits and vegetables and limit foods high in saturated fat, sugar and salt. You don’t need to increase your calorie intake during the first two trimesters, and only need an extra 200kcal per day in the last trimester. It is important not to consume too many extra calories when pregnant as any extra weight can be difficult to shift after the baby is born and being overweight in pregnancy can increase the risk of a number of conditions for you and the baby.

Although recommendations for iron do not increase in pregnancy, above those for non-pregnant women, it is especially important these recommendations are met. In a recent dietary survey twenty three percent of women of child bearing age (aged 19 to 64 years) were found to have iron intakes below the level of increased anaemia risk. Five percent were actually found to be anaemic as a result of iron deficiency. Evidence suggests that being anaemic in pregnancy as a result of too little iron, increases the risk of having the baby early, with a low birth weight, potentially jeopardising its future health.

In the UK there is no increase in the recommended requirement for iodine during pregnancy as sufficient iodine intake should be achievable from a balanced diet that includes dairy and fish, however a 2014 report of iodine by the UK Scientific Advisory Committee on Nutrition (SACN) recognised that individuals excluding fish and dairy may be at risk of deficiency. If you exclude these foods from your diet for some reason, then you might want to consider taking a supplement of iodine, see NHS Choices for more information.

Because the formation of a new life depends on the mother consuming and providing all the key building blocks for growth, it is even more important that you consume a broad range of healthy, nutritious foods both before and during pregnancy to ensure your body is fully equipped to house and feed a guest for nine months.

Unfortunately, pregnancy can come with a number of side effects that may affect how easy it is to achieve a balanced diet. If you are struck by the dreaded morning sickness, then your food preferences can be completely overturned and trying to decide what to have for dinner when walking around the supermarket can feel like torture. I remember feeling sick at the thought of eating meat. I was fine if someone put it in front of me to eat, but the thought and act of cooking it made me feel sick. Being in early stages of pregnancy during the summer in barbeque season was quite a challenge. Luckily, I had also craved fruit and ice, which were also in plentiful supply at that time of year. I’m ashamed to admit that my other main craving was tortilla chips. Sometimes they were the only thing I could eat to stop me from feeling queasy, but I only needed one or two at a time! It is common in pregnancy for food preferences to change, so if you do get a craving, try to limit your consumption of salty/sugary/high fat snacks as much as possible. You can only try your best to stick to healthy eating principles and you might find it useful to enrol the help of your husband/partner, family and/or friends to help plan and prepare meals. For some people, it can be a struggle to keep anything down at all. If this is the case, make sure you drink lots of fluids and raise any serious concerns with your midwife or family doctor.

Unfortunately, there are a number of foods and drinks to limit or avoid during pregnancy in order to protect your baby from potential harm. There are a couple of reasons for these recommendations. Firstly, when you are pregnant you have a weakened immune system and are therefore more likely to contract certain infections that can be transmitted from food (such as listeriosis and parasitic toxoplasmosis), and while the symptoms may be relatively minor for the mother they can be fatal for the baby. The second reason is that any toxins in your diet (such as alcohol, caffeine, mercury and pollutants) can pass across the placenta to your baby. I have listed  below the key foods and drinks to be aware of during pregnancy as advised by the NHS:

There is some good news, eggs with the Red Lion stamp are now safe to eat raw or lightly cooked in pregnancy as they are considered very low risk of containing salmonella. You can also eat prepacked cooked ham and beef; cooked shellfish; smoked salmon; taramasalata; sushi (provided any wild fish has been frozen first) and nuts. Hard cheeses including stilton are fine to eat due to the reduced likelihood of bacteria growing. Cooking soft cheese thoroughly would kill any bacteria, so you can still eat cooked brie, if you have a real craving!

Looking up information on diet on pregnancy online can be overwhelming and confusing, especially as advice differs from country to country. You may have heard that in France, for example, pregnant women still drink alcohol, eat rare meat, unpasteurised cheeses and pâté, so why should you worry about it? Well, it’s all about balancing risk. The risk of harm is low before you get pregnant, but increases during pregnancy, so you might decide to consume a food or drink on the list and be totally healthy, but if you were to get ill and something were to happen, you might think those couple of mouthfuls of enjoyment weren’t really worth it.

Advice given in the UK is based on rigorous assessments of risk specific to a UK setting, so it is best to stick this advice. For more information including more comprehensive explanations of foods to avoid, healthy snack ideas during pregnancy and important information on food safety, I would advise checking the NHS Choices website and the British nutrition Foundation.