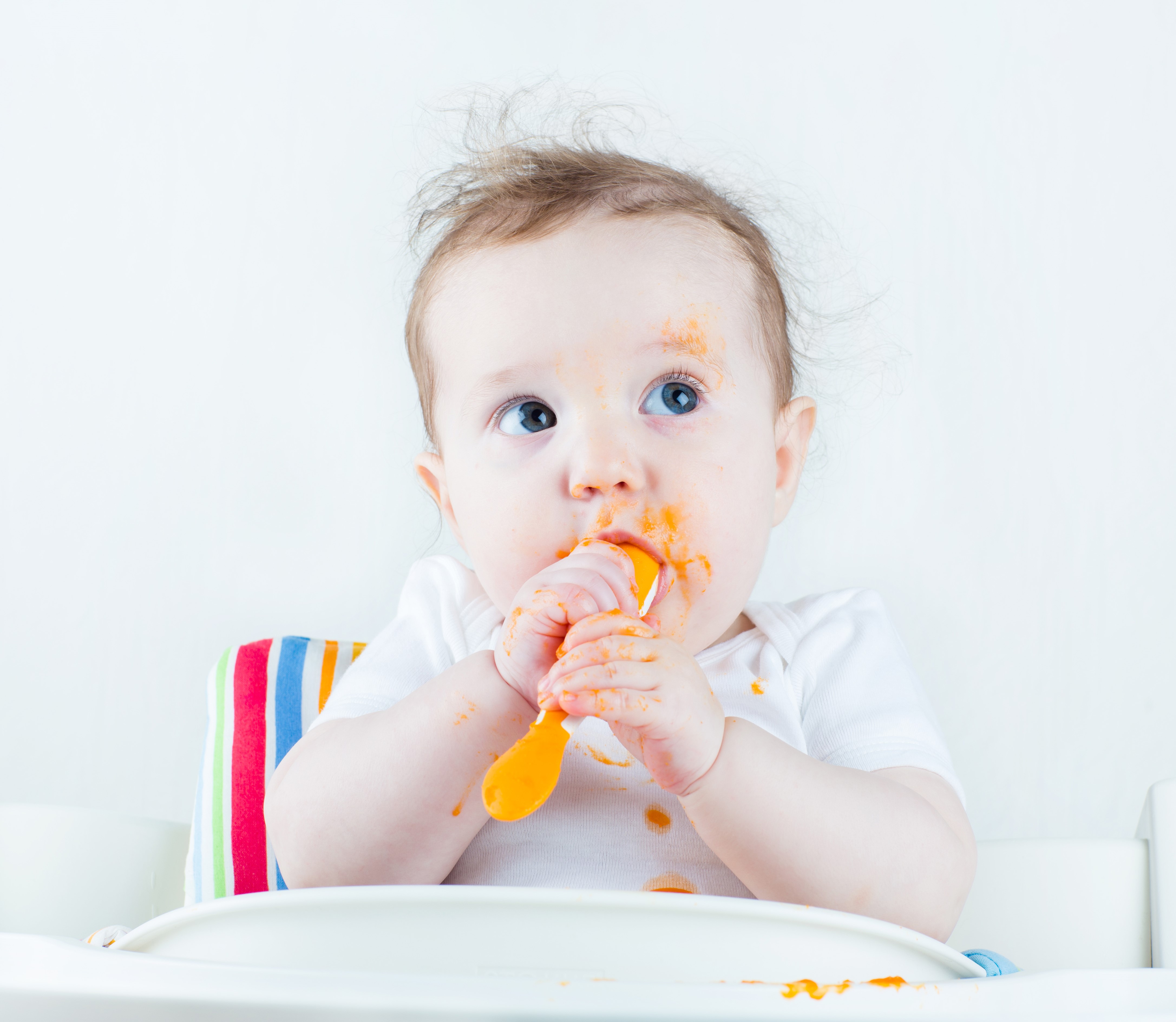 You made it through pregnancy and childbirth and you have got into a pretty nice routine of sleeps and milk feeds. You’re feeling a little bit smug that you seem to be on top of things. Then you start to think about weaning, or ‘complementary feeding’ as it is now known. How on earth am I supposed to find time in the day to feed my baby meals, let alone cook and prepare them or clean up afterwards?

It can be quite a daunting time. A new survey1 shows one in four mums (26%) did not feel confident introducing solid foods. You have all the added pressure from grandparents telling you what worked wonders in their day, should you be going down the baby-led weaning route or are purees still ok? Being a general food enthusiast, I was really excited about this stage. Another opportunity to share new experiences with my baby, to take joy in the fact I have prepared something wholesome, nutritious and delicious for them to eat and watch their little face as they love it. The reality of having a very allergic baby was quite different, and I have already highlighted some of the challenges of feeding more than one child in a previous blog. However, I’m writing today not to terrify you at the prospect ahead, but to prepare you with the essential toolkit of knowhow: my When, Why, What, Where and How of weaning:

You should start to introduce food to your babies around six months. I was lucky enough to work on the most recent dietary survey of infants and young children carried out in the UK, and it showed that three-quarters of parents had introduced solid foods by the time their baby was 5 months old.

Before this your baby’s digestive system is not fully developed and breast/formula provides all the nutrients they need. Earlier introduction is associated with greater risk of gastrointestinal, respiratory and ear infections. Don’t wait any longer than six months, due to greater nutritional requirements e.g. iron.

This recent survey1 found many mums confused signs like wanting extra feeds (46%), chewing fists (32%) and waking in the night (24%) as a sign that they’re ready for food. Instead wait for signs that:

As they have been used to drinking only milk for the last six months baby rice mixed with their usual milk can be a great first food. Then try vegetables and fruit either mashed and soft cooked or pureed along with soft pieces small enough for your baby to pick up (i.e. size of your finger). Babies are born with a love of sweet tastes and therefore it is worth offering vegetables before offering fruit, so they don’t get too used to the intense sweet taste. You can slowly build up the quantity over a few weeks and move on to mashed, less smooth, more lumpy food, such as soft cooked meat; unsweetened full fat dairy products i.e. yogurt, fromage frais; finger foods such as strips of toast, pitta bread, meat or fish.

Evidence suggests that letting babies explore and feed themselves, known as ‘baby led weaning’ may help acceptance of a wider range of textures, and flavours, which can have a positive impact on speech development and management of own intake. However, the reality is that a lot of the food ends up on the floor and it’s hard to know just how much they’re eating. I would say a combination of both is a great compromise, offer purees and soft food on a spoon, as well as giving your little one free access to lots of finger food that they can explore with and feed themselves.

There are a number of foods to avoid at the beginning:

The risk of choking can be really scary for parents. Babies will gag on food and regularly regurgitate while eating, which is normal so don’t panic. Try to be relaxed and prepare food adequately. Either cut up food really small or leave in strips for your baby to hold and break bits off e.g. hard cheese. Remove pips and tough skin and always cut up grapes length ways. Don’t give them small, hard pieces of food such as nuts, popcorn, raw apple or carrot.

Allergies are on the increase and feeding babies for the first time with commonly allergic foods can also be nerve-wracking for parents. Peanuts, nuts, seeds, egg, cows’ milk, soya, wheat/gluten, fish and shellfish, should be introduced in very small amounts, one at a time, after the age of six months. Watch carefully for any symptom of an allergic reaction, either immediately or up to 48 hours later, including:

To begin with you will only need a tiny pot or bowl containing a few teaspoons, once a day. Then you can work up to more often and larger quantities moving towards two then three small meals a day at your and your child’s own pace.

You should offer your child sips of water with their food from a free flow cup without a value, rather than a bottle as this is better for their teeth and will help them learn to sip. You don’t need to sterilize feeding equipment and for babies over six months you don’t need to use cooled boiled water, tap water is fine.

You should be giving your baby vitamin D drops. The NHS recommends that all babies under five years of age are given a daily vitamin supplement of A, C, D, but not needed when babies are having more than 500ml of formula a day.

Where, when and how?

Choose somewhere comfortable at a time of day that fits in best with your routine, so they are hungry but not too tired. Take your time and try to enjoy it, don’t force them to eat anything and let them get a bit messy. It can be hard to resist wiping their mouths after every mouthful, but try not too as having your mouth wiped is no fun for anyone and you don’t want to put them off eating.

You may have all the best intentions, pureed vegetables and healthy fingers foods at the ready, yet things don’t go as you planned. Time; individual preferences of your little one (yes they may be young, but they are very much their own person!); allergies and grandparents are just a few of obstacles you may face. Perseverance will see you through. Try to resist exposing your little ones to high sugar and high salt foods such as soft drinks, confectionery and crisps for as long as you can.

Have fun and embrace the redecoration of your kitchen/outfits in a lovely carrot orange!

If you still have lots of questions Start4Life have just launched a brand new weaning hub, which was developed in partnership with parents, to help parents through this time. With lots of NHS approved advice and tips for each stage, including simple, healthy recipes. To find out more visit: www.nhs.uk/start4life/weaning

I also offer weaning workshops in South West London, covering all the things you need to know, so get in touch if this would be useful.

Note the content of this blog was updated on 6th February 2019 to include the details of the Start4Life hub.

2 Replies to “Worried about weaning?”